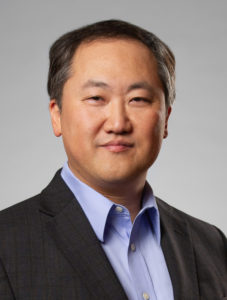 The scientific director at The Jackson Laboratory (JAX) for Genomic Medicine in Farmington is the first chairholder of the recently-announced Robert Alvine Family Endowed Chair.

Dr. Charles Lee, a geneticist, oversees 27 faculty who are investigating many aspects of human genomics and disease, including immune response, cancer genomics, the microbiome, and genome structure, according to JAX officials.

The Maine-based non-profit company recently announced the establishment of three endowed chairs — the highest recognition an organization can bestow on a faculty member or a staff member. Located next to the UConn Health campus, JAX Genomic Medicine opened in 2014. It facilitates clinical collaboration with the state’s universities and hospitals, according to JAX.

The Robert Alvine Family Endowed Chair was established after Robert Alvine, chair emeritus of the JAX Board of Trustees and a Woodbridge resident, committed $1.5 million, matched by JAX, which permanently provides funding for the leadership position at JAX Genomic Medicine.

“Dr. Lee is a renowned geneticist, a leader in translational science and a treasured colleague here at JAX,” said JAX President and CEO Lon Cardon. “I am doubly thrilled that Robert Alvine has made this generous gift and that this esteemed position has been granted to Dr. Lee. I know that he will utilize this honor to continue to drive the advancement of JAX Genomic Medicine in understanding the complexity of human biology and disease to drive medical progress.”

Prior to joining JAX Genomic Medicine in 2013, Lee spent 14 years at Harvard Medical School and Brigham and Women’s Hospital.

The work JAX-GM does includes working with the state to conduct viral sequencing for the identification of new COVID-19 variants. Governor Ned Lamont appointed Lee to be one of eight advisory members of the Reopen Connecticut Advisory Task Force in April 2020. Lee recently became a member of the board of trustees of the Connecticut Science Center and contributed to the opening of their new exhibit, Genome in Me.