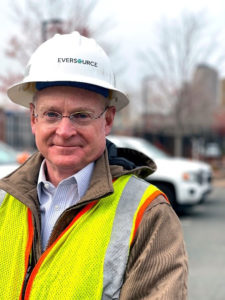 Eversource, which provides energy to businesses and residents, has announced the appointment of a Tolland resident as its new president of the company’s electric operations in Connecticut.

Steve Sullivan, a company employee for the last 30 years, will work to help rebuild “the confidence and trust of our customers, the business community and elected leaders across Connecticut,” the organization announced.

“Steve’s deep industry knowledge and experience position him as the ideal candidate for this strategically important position,” said Eversource Executive Vice President and Chief Operating Officer Werner Schweiger in a prepared release. “As we re-set our relationships with communities and customers in Connecticut, Steve will play a critical role in building positive relationships and partnerships while driving a refreshed customer focus and aiming for continuous operational improvements.”