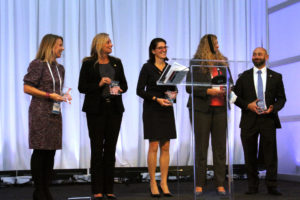 The Connecticut Conference of Municipalities honored six state legislators for their strong commitment to the cities and towns they represent, the organization has announced.

Cohen – who represents Branford, Durham, Guilford, Killingworth, Madison, and North Branford – is the Senate Chair of the Environment Committee and Vice-Chair of the Commerce Committee. CCM representatives said they honored Cohen due to her work on issues like the environment, gun violence prevention and the state economy.

Sampson – representing Cheshire, Prospect, Southington, Waterbury and Wolcott – helped promote transparency in government and budget matters, according to CCM. He is the ranking senator on the Government Administration and Elections Committee and the Labor and Public Employees Committee.

Barry represents Glastonbury, and has worked with businesses looking to expand and relocate, according to CCM, and she helped pass the “Tobacco Free Parks” program in Glastonbury.  Barry is the Vice Chair of the General Assembly’s Education Committee.

Cook represents Torrington and is a Deputy Speaker of the House. CCM representatives honored her for her work on the state’s domestic violence laws. She has been previously recognized as a Children’s Champion and Legislator of the Year by the Connecticut Early Childhood Alliance.

Vahey,  representing Fairfield’s 133rd Assembly District, is House Chair of the Planning and Development Committee, where her work helped with modernizing and re-organizing zoning statutes, CCM officials said, adding she has also helped with issues surrounding voting – including voter accessibility, as a member of the Government Administration and Elections Committee.

Previously a town attorney for East Haven and a board member of the East Haven Chamber of Commerce, Zullo now represents the 99th District, which covers that town. He has served on the Veterans’ Affairs Committee, the Housing Committee, the Finance, Revenue and Bonding Committee, and the Planning and Development Committee.