Fourteen police officers from seven municipalities are the first-ever graduates from the Connecticut Institute for Youth and Police Relations, from which they will go back to their communities with their own programs that will benefit the local youth and help build strong relationships, officials said. 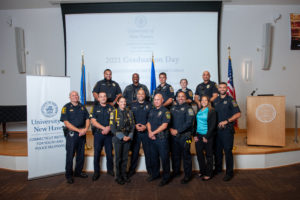 Fourteen police officers from seven municipalities are the first-ever graduates from the Connecticut Institute for Youth and Police Relations.

This initiative was designed to provide education to police to help them balance “the demands of public safety and the best interests of youth and the Black and diverse communities,” according to an announcement issued by the Hartford Foundation for Public Giving which, along with the Travelers Championship, provided a two-year, $400,000 grant to launch the program.

Officers from Hartford, West Hartford, East Hartford, Bristol, Glastonbury, Windsor, and the University of Connecticut completed the training, which lasted eight months. Led by UNH faculty, the curriculum included approaching and de-escalating situations in the field, the foundation said.

Boyd has 13 years of experience as a deputy sheriff and in police training, while Cooper’s research focuses on juvenile justice and delinquency prevention, according to the foundation.

The officers are working with their departments and other public offices to develop community outreach programs as a way to build relationships with young people in their areas.

Among the graduates and their initiatives: