A 6th grader from South Windsor recently took third place in a global competition for her invention of a reusable and affordable filter.

Gauri Kumbar’s invention, The Ultimate Filter, placed third in the 3rd- to 5th-grade category at the first Invention Convention Globals presented by Raytheon Technologies. The virtual awards celebration was Aug. 20, and was hosted by Gray Bright, Senior Director of Development at Hasbro, with special keynote speaker William Kamkwamba, author of The Boy Who Harnessed the Wind. 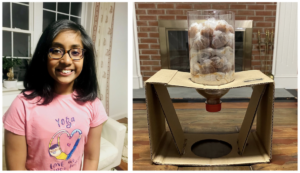 Gauri Kumbar and her invention, The Ultimate Filter

Kumbar submitted the invention as a fifth-grader at Philip R. Smith Elementary School in South Windsor. She was one of 185 students from participating Invention Convention Nationals programs in the United States, Mexico, Singapore, and China.

In a video, which can be watched below, Kumbar discusses her invention. “It is not only affordable and effective, but also eco-friendly,” Kumbar said.

She said there are currently 415 dead zones in the world. “That number is going to keep rising unless presented with an effective solution.” Kumbar’s invention aims to clean the water itself, preventing the formation of dead zones.

Kumbar had previously won the Originality Award and the Kettering Built Award at the Invention Convention U.S. Nationals in June. To participate in the Invention Convention Globals, which was by invitation only, students had to submit a video presentation of their inventions, a prototype, an inventor’s log book showing their process and a display board highlighting key points of the invention process, organizers said.