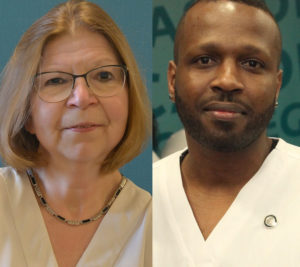 The Nightingale Awards for Excellence in Nursing, an organization created to recognize the achievements of those in the nursing profession, recently honored both an instructor and a student from Goodwin University.

Leslie Harris, assistant professor of the university’s RN-to-BSN program, and Mark Bean, a student in the Bachelor of Science in Nursing program, were among the 2021 recipients of the award.

In addition to her work at Goodwin, Harris has also served in leadership roles with the Connecticut Nurses’ Foundation, university officials said.

While he is completing his bachelor’s degree, Bean has already earned his Associate degree and is now a licensed registered nurse at Community Health Services, Inc., where his work earned him the award nomination.

The Nightingale Awards for Excellence started in New Haven in 2001, and in 2003 expanded to include recognition ceremonies in the Hartford, Norwich-New London, and Stamford regions. Nurses from all health-care settings can be nominated if they are involved in clinical practice, leadership, and/or education, according to the organization’s website.