Political Staffers Share Their Stories, Including A Familiar One From Connecticut

STAFFER, a podcast hosted by Global Strategy Group partner Jim Papa, recently asked listeners to call in with their stories about working on Capitol Hill and other political jobs, and the calls have been pouring in. 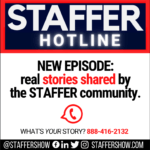 STAFFER recently posted a first sampling of some of these stories – which include a chance meeting in a Lyft ride that ends up in a new opportunity, to the aftermath of a speech, adjusted slightly to simplify an issue, that ended up backfiring.

Papa, in his introduction to the show, says the stories demonstrate the behind-the-scenes work that goes into governing and campaigns, the meaning found in the work, interesting people they meet, “and the problems that arise when things go sideways.”

Papa says these broadcasts will be posted periodically. Anyone that has a story to share can call 1-888-416-2132.